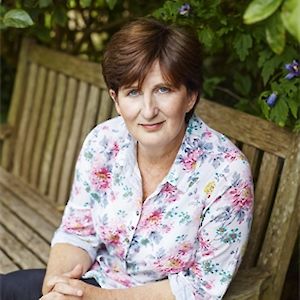 A delicious combination of lunch and literature for women to entertain their clients or simply meet up with friends.

The Half Sister by Catherine Chanter

Catherine Chanter was born and raised in the West Country. She has written for BBC Radio 4 and has had short stories and poetry published in a wide range of anthologies and publications. Chanter has a Masters, with distinction, in Creative Writing from Oxford Brookes University, and won the Yeovil Poetry Prize in 2010. Catherine’s debut novel, The Well, won the 2013 Lucy Cavendish Prize for Unpublished Fiction, was longlisted for the 2015 CWA John Creasey (New Blood) Dagger, and was picked for the Richard and Judy Book Club. She often draws on her own experiences to create her characters. She was adopted, only recently reuniting with her birth mother, and in her day job works for a charity which seeks to engage excluded and vulnerable children and teenagers in learning.

When she was sixteen, Diana left her unhappy family and set out to make a new life. Twenty five years later, she has arrived. Recently married to Edmund, there are just the two of them living at Wynhope, his family’s historic country home, both happy for the past to be locked away and for the future to be free from responsibility. But when Diana hears that her mother has died, she impulsively asks estranged half-sister Valerie and her nine-year-old son to stay. The night of the funeral, fuelled by wine and years of resentment, the sisters argue and a terrible accident occurs. The foundations of a well-ordered life are cracked and the lies begin to surface, one dangerous secret after another demanding a voice. And then there’s the boy, watching, waiting…

Focusing on the perspectives of each character in turn, this is a story the way in which the truth can have many different shades, of deeply hidden secrets and the endless complications of family.

Love After Love by Alex Hourston

After fifteen years writing strategy for advertising agencies, Alex Hourston took a break to go back to university and her first love, books. She completed a Masters in English and started a PhD, but put it aside when the idea for this novel surfaced. Alex lives outside Brighton with her family.

‘A beautifully written page turner of a book. I desperately cared about the characters and stayed up till the small hours to discover their fate.’  Kate Hamer, author of The Girl in the Red Coat and The Doll Funeral

Love After Love is a searing exploration of female identity and sexual politics. Nancy Jansen is this gripping novel’s protagonist. She lives a happy and fulfilling life and is the beating heart of her family and the centre around whom many lives turn. Mother, therapist, daughter, sister, wife we meet Nancy at a turning point, as she bumps into Adam, a man with whom she has an undeniable connection. Now she has a new role: Lover. Everybody can be happy, Nancy believes, so long as they can be kept apart. But when these lives start to overlap, collision becomes inevitable, with consequences for all. What follows is a blazingly honest and page-turning portrait of a family fracturing. Hourston’s skilful prose creates enthralling tension as Nancy begins to understand this new relationship as a chance to live a different life and, in the process, to discover who she may actually be beneath the roles she embodies.