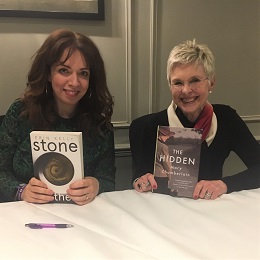 Erin Kelly is the best-selling author of Broadchurch- The Novel, inspired by the mega-hit TV series. She has also written The Poison Tree, The Sick Rose, The Burning Air, The Ties That Bind and He Said/She Said, which spent six weeks in the top ten in both hardback and paperback, was long-listed for Theakston’s Old Peculiar Crime Novel of the Year Award, and selected for both the Simon Mayo Radio 2 and Richard & Judy book clubs.  She has worked as a freelance journalist since 1998 and written for The Guardian, Sunday Times, Daily Mail, Red, Elle, Cosmopolitan and The Pool.  Born in London in 1976, she lives in North London with her daughters.

Kelly is a master a drip-feeding us the details, keeping us guessing about the truth, and the many shades of grey it contains, right until the end –The Observer

Marianne was seventeen when she fled her home, her family, her boyfriend Jesse and the body they buried.  Now, forced to return, she can feel the past closing in on her.  And Jesse, who never forgave her for leaving, is finally threatening to expose the truth.

Marianne will do anything to protect the life she has built; the husband and daughter who must never know.  Even if it means turning to her worst enemy.  But Marianne may not know the whole story – and she isn’t the only one with secrets they’d kill to keep.

Moving back through time to reveal twists you will never see coming, Stone Mothers is the gripping new suspense novel from this masterful writer.

The Hidden by Mary Chamberlain

Mary Chamberlain is a novelist and historian. Her debut novel, The Dressmaker of Dachau, was published in eighteen countries. She is the author of non-fiction books on Caribbean history, oral history and women’s history, including Fenwomen: A portrait of women in an English village, the first book published by Virago Press. She has lived and worked in the Caribbean and now lives in West London.

Shines a piercing light on the shrouded history of human trafficking and labour camps in the Channel Isles during WW2. A fascinating and powerful story of love, endurance, betrayal and guilt.  Anna Mazzola, author of The Unseeing.

Dora and Joe and Geoffrey are living out their retirement comfortably, when their worlds are shattered by the arrival of Barbara Hummel, a young German, anxious to identify a mysterious woman whose photograph she has found among her mother’s possessions.  As the truth of what happened in Jersey under the occupation is exposed, the lives of Dora, a Jewish refugee and Joe, a Catholic priest, start to unravel in shocking and surprising ways.

For while Dora had been forced to conceal her Jewish identity; Joe had kept quite another secret. The consequences of the lives they lived and the lies that followed are as unexpected as they are devastating.

Drawing on her research in the National Archives, historian and bestselling novelist Mary Chamberlain reveals the untold history of women and men who were held captive in the islands and whose lives were changed forever by the Occupation.  The Hidden is a compelling story of love and betrayal, shame and survival.

Wonderful event – it was an absolute tonic being in the company of the author and listening to her read her own work. Thank you! Will be recommending your lunches!