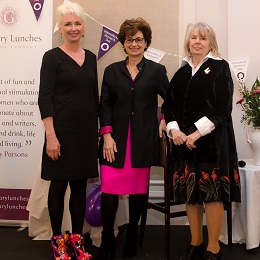 Ruth Hogan was grew up in a house full of books and with a passion for reading and writing.  Following a degree in English and Drama from Goldsmiths University in London, she had a successful ‘if uninspiring’ ten year career in local government before a car accident left her unable to work full-time: the push she needed to start writing seriously.

After being diagnosed with cancer in 2012, and chemo kept her up all night, she passed the time writing: the eventual result was her debut novel The Keeper of Lost Things. Queenie Malone’s Paradise Hotel is inspired by an altogether more positive experience – eloping with her partner to get married in the Royal Pavilion in Brighton.  They live in a chaotic Victorian house with an assortment of rescue dogs.

An absorbing, tender and heartfelt story of a complicated mother and daughter relationship. Beautifully crafted from start to finish, Hogan fans… are in for a real treat. Mike Gayle, author of The Man I Think I Know

Tilly was a bright, outgoing little girl who liked playing with ghosts and matches. She loved fizzy drinks, swear words, fish fingers and Catholic churches, but most of all she loved living in Brighton in Queenie Malone’s magnificent Paradise Hotel with its endearing and loving family of misfits – staff and guests alike.  But Tilly’s childhood was shattered when her mother sent her away from the only home she’d ever loved to boarding school with little explanation and no warning. Now, Tilda has grown into an independent woman still damaged by her mother’s unaccountable cruelty. Wary of people, her only friend is her dog, Eli. When her mother dies, Tilda goes back to Brighton and with the help of her beloved Queenie sets about unravelling the mystery of her exile from The Paradise Hotel only to discover that her mother was not who she thought she was.

Spies and Stars: MI5, Showbusiness & Me by Charlotte Bingham

Charlotte Bingham became a bestselling author whilst still in her teens. Her father, John Bingham, was a member of M15 where Charlotte worked as a secretary. He was an inspiration for John le Carré’s character George Smiley.

Charlotte went on to write thirty-three internationally bestselling novels and, in partnership with her late husband Terence Brady, a number of successful, plays, films and TV series including Upstairs Downstairs and Take Three Girls. She has also written her uproarious memoir, Coronet Among the Weeds, as well as the recent follow-on detailing her time as an unwilling MI5 employee, MI5 and Me.

London in the 1950s. Lottie is a reluctant typist at MI5 and the even more reluctant daughter of the organisation’s most illustrious spy. Now she’s had the bad luck to fall in love with Harry, a handsome if frustrated young actor, who has also been ‘persuaded’ into the family business, acting as one of her father’s undercover agents in the Communist hotbed of British theatre.  Together the two young lovers embark on a star-studded adventure through the glittering world of theatre – but, between missing files, disapproving parents, and their own blossoming creative endeavors, life is about to become very complicated indeed…