You Will Be Safe Here 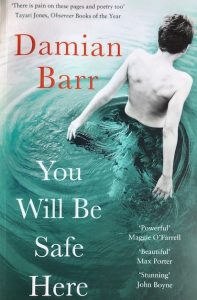 This vivid novel focuses on two significant periods in South Africa’s history, the Boer War and the repeal of arpartheid laws.  The first half of the book follows the story of Mrs van der Watt and her son Fred who are brutally imprisoned in Bloemfontein Camp after the British seize their farm.  As she negotiates life in the camp for survival and above all, to protect her son,  we learn about a shameful and little known chapter in British history.  The second half of the book follows Willem , his single mum Irma and adoring gran, Rayna.  Persistently accused of being a ‘mooftie’, Willem is a gentle boy who loves books and avoids sport, so Irma packs him off to New Dawn Safari Camp where they will make a man of him.   It is only towards the end that the two stories come together and you see how the past can shape the future in positive and negative ways. Damian Barr has a gift for conjuring up a sense of place and all the characters and their relationships are so well drawn, it is impossible not to care what happens to them all.

Buy a copy of You Will Be Safe Here